Presentation of the Ensemble 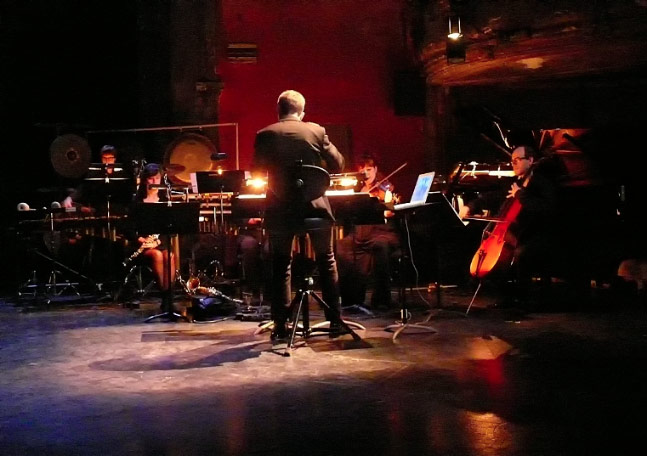 The composer Philippe Hurel and conductor Pierre-André Valade created the ensemble Court-circuit in 1991, following a meeting with the founders of Analix Gallery in Geneva. “Created by a composer for composers”, Court-circuit from the outset was a place of experimentation, an art project promoting intense risk-taking in a spirit of total freedom. A strong commitment to contemporary music is the real cement of the ensemble. Court-circuit owes its nervous, rhythmic, incisive identity, as well as its banner-like name, to the musicians and their leader Jean Deroyer, who animate it with determination and virtuosity. A sought- after partner for composers, the ensemble cheerfully plays its role of agitator in the international contemporary scene.

Court-circuit is also involved in interdisciplinary projects that go beyond the sphere of contemporary music. After working with the Paris Opera for choreographic creations (Preljocaj, Lagraa),the ensemble had a fruitful partnership with the Théâtre des Bouffes du Nord (Paris), where it created two chamber operas (The Second Woman – Grand Prize of Critics 2011 – and Mimi – 2014 – both composed by Frédéric Verrières and staged by Guillaume Vincent, before beginning a collaboration with the Opera Comique (Paris) where it participates in the opera La Princesse légère composed by Violeta Cruz and directed by Jos Houben (premiere in 2017).

In parallel, Court-circuit created several ciné-concerts such as Paris qui dort (a René Clair film, with music by Yan Maresz) and Les hommes le dimanche (a Robert Siodmak film, with music by Alexandros Markeas).
Court-circuit asserts its pedagogic mission by regularly working with the Paris Conservatory and the Ile- de-France conservatories. In 2012, it settled in the Hauts-de-Seine, where it conducts numerous projects with music institutions and national distribution structures.